skip to main | skip to sidebar

This weekend's grilling went better than last, in a way. A week ago yesterday, the grill's flames reached out and touched someone: me. There's more over at "Through One Dad's Eye."

I see that I've been neglecting this blog. Time to stop that. 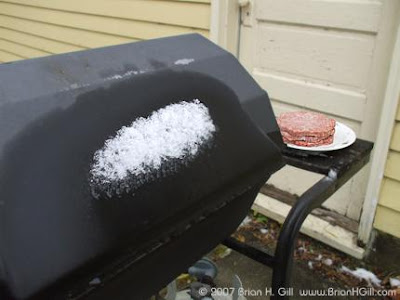 This weekend was a sort of milestone in this year's grilling. We had cat-track snow very early yesterday. Most of it was gone by noon, apart from diehard patches on the north side of things.

That patch of snow on the grill didn't cause any problems, but the wind did.

I used up almost a half-dozen matches, getting the fire going. Then, I noticed flames getting blown out the bottom of the grill. That got my attention, because I was downwind of the fire. I don't thing that the grill is out to get me, but there does seem to be a pattern here.

My wife said that we may need a new grill. She could be right.

Today's grilling went better, in a way. I didn't need to defend myself against the grill, but the burgers came about a bit more well-done than I intended.
Posted by Brian H. Gill at 12:54 PM 1 comment:

Search the Web (this blog, too)

Bookmark it,
Add it to your Favorites,

Brendans' Island: Reflecting the reality of small town America. Through the eyes of a husband and father in Sauk Centre, Minnesota.

Brian H. Gill
I'm sixty-something. My wife and I have six kids, four surviving, and one grandchild so far. A central Minnesota town home has been my home for the last few decades. My wife's a 'cradle Catholic,' I became Catholic as an adult. I take my faith seriously, but not grimly. I mostly read, write and make the occasional digital picture. Not necessarily in that order.

My Google profile, Brian Gill, doesn't tell you much about grilling: but it tells a bit more about me; and shows off some of my art.

Unless otherwise noted, material in my blogs is copyright © 2007-present by Brian H. Gill. All rights reserved. It may not be published, broadcast, rewritten or redistributed in whole or part without express written permission. Fair use is permitted, including short quotations, links, and extracts used in search engines.